Since the early days of the brand, Patek Philippe has been a manufacturer of complicated watch movements. One of the more rare and unusual complications a movement can hold is a so called minute repeater function. A minute repeater is a feature where the watch is able to chime which indicates the current time down to the minute. There is only a few watchmakers that has the skill to construct and produce movements of this level. Patek Philippe has always been ground breaking when it comes to minute repeaters and complicated watches. They made this very clear a couple of years back when their Grandmaster Chime watch became the worlds most expensive watch ever to be sold at an auction. The price this particular piece went for was 31,000,000 CHF. With their latest release, the manufacturer once again proves that they are ahead of the curve. Introducing the Patek Philippe Grande Sonnerie 6301P. The Grande Sonnerie 6301P is a minute repeater i solid platinum, measuring 44,8mm. 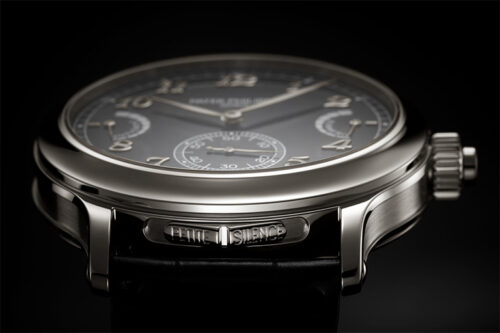 The discreet enamel based dial leaves plenty of room for the Breguet numerals in white gold. The hour and minute markers have also been given more space since the seconds are represented in a separate sub dial placed just above 6 o´clock. At 6 and 9 we have power reserve indicators for the movement and the chime complication. Despite of all this the watch is sleek with a height of only 12mm. One of the more interesting aspects of the 6301P is that the movement GS 36-750 PS IRM is based on the same movement as the record Grandmaster Chime watch. Minute repeater watches are the ones demanding the most skill from the watch maker, and all though the 6301P has a height of 12mm, the width of 44,8mm tells us that there is a lot going on inside. The movement is pieced together by 703 separate parts, and with the see trough glass caseback you can have a good look at the magnificent hand wound movement. If you for any reason prefer not to, the watch also comes with an optional solid platinum case back. Patek Philippe Grand Sonnerie 6301P is not limited, but will very likely be produced in a small quantity. Patek Philippe has not yet disclosed the price of the watch. 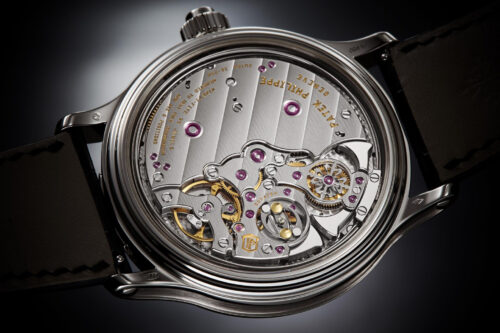